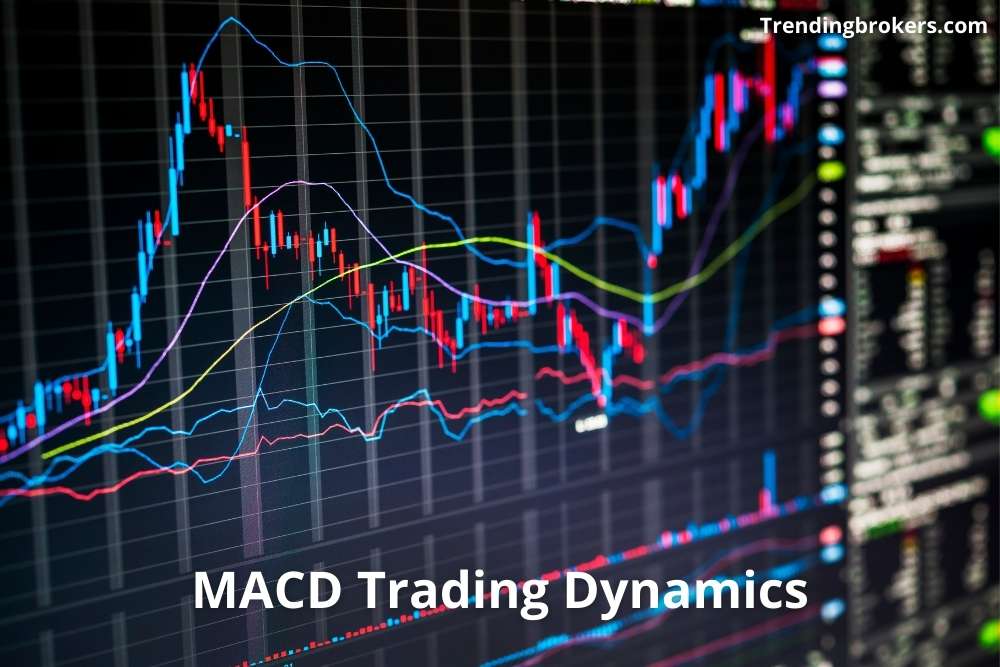 Moving Average Convergence Divergence (MACD) oscillator was developed by Gerald Appel. The indicator is used in various markets to analyse the markets and their momentum for trading. The MACD trading involves two trend signals where the moving averages are converted into momentum by deducting the longer moving average (MA) from the shorter MA

Thus, traders of MACD can have the best of both momentum and trend following. Traders study the charts and patterns formed with the lines and predict the market.

Moving Average Convergence Divergence is a practical tool that examines the price of the security traded. Therefore, the historical and present prices are evaluated to determine the future values of the security. All these qualities of MACD make it an essential indicator for serious traders.

Moving Average Convergence/ Divergence is a measurement that studies the relationship of exponential moving averages. The indicator contains three kinds of lines that help traders analyse the trend and momentum of the market. The MACD line (blue), the signal line (red) and the histogram (green). The histogram shows the gap between the MACD line and the signal line.

MACD line is the difference between exponential moving averages, which are usually 12 and 26 periods. In contrast, the signal line is 9 periods exponentially smoothed moving average convergence divergence line.

The lines of MACD move around zero line, moving in and around the line, which gives it the name of the oscillator. Traders identify overbought and oversold conditions from the lines. When the line is above zero, it is overbought and when below zero line, it is an oversold situation.

The indicator relates to moving averages which is the base of the analysis; traders always have some essence of the simple moving average in their further analysis. MACD incorporates moving averages in getting correct predictions of the market.

MACD Trading uses lines and zero lines as reference points to analyse the patterns, so here we have discussed the points that make a mark in the trade using MACD:

So, with the trend, traders can also use the MACD indicator for buying and selling securities. A trader can use the analysis strategy for various markets, and it is quite a relevant strategy as per the market and their instruments.

MACD uses some specific tools to analyse the market trends and momentum. The various tools of technical analysis include:

Several online brokers offer trading platforms that use MACD indicators to analyse the market. Traders can use any broker available in the market. A trader can use these to open an account and trade using the indicators. Although the process is automatic via the computerised system, traders should be aware of the process.

So, here we have discussed how MACD is calculated:

Histogram: Gap between the two, MACD line and Signal line

When a zero value is indicated on the histogram chart of MACD, it is a sign that the two lines crossover to buy and sell signals.

The first and the most primary way of interpreting the trend and momentum of market trade is by using MACD Crossovers. Traders study these lines of moving averages to get into the investment decisions.

Similarly, when the opposite action takes place, that is, the short term 12 period EMA crosses below the long term 26 periods EMA, then the MACD line is below the zero line.

Thus, it is a potential signal for the buy and sells of securities in the market.

The blue and red lines on the charts represent the MACD line and the signal line, and the difference between these two is shown through the histogram. Thus, traders can easily spot these lines and figure out the difference to get the MACD signal for trade.

Histogram charts are a valuable tool for the MACD indicator as these draw the patterns for understanding the various traders.

Convergence as a word means to move toward uniformity; in MACD, the histogram shrinks in height due to a change in the trend direction. For example, the direction of stocks change, or it slows down, which leads to shrinkage of the histogram.

As the MACD histogram shrinks, the MACD lines get closer; that is, the MACD line comes in uniformity with the Signal line. This is the convergence situation of the MACD indicator.

The shrinking of the market is the indicator of reversal in the market trend, and the increase of the histogram indicates the strong market trend towards a direction.

A bullish divergence is formed when the security traded records a low and the MACD forms a higher low. Where the lower low is the downtrend, and the higher low is the less downside momentum of the MACD.

MACD’s primary goal is to get trading signals and price trend changes to forecast the market. Traders with MACD indicators decide on their buy and sell of the securities to maximise their profits. Moreover, these help to reduce the risks of the trade by analysing the market in advance for traders and investors.

Investors of the market are excited to trade and invest, and in their emotional turmoil, they end up losing their money. As a result, their buying and selling and speculations on securities turn out to be wrong. Therefore, MACD indicators are used by traders to get suggestions about the trade opportunity, what time to trade and avoid risks. For this, they use historical data of prices and other factors to certain future price trades.

Traders of the market can reap many benefits from using indicators and even using many indicators together for more confident decisions. Here, we have listed the advantages of the MACD Trading indicator:

With benefits come some drawbacks; MACD also has some disadvantages as well. Below discussed are the limitations of the MACD indicator, which make it not perfect for single use. Let’s check the limits of MACD:

MACD Trading can provide traders with false reversals; sometimes, the reversal shown by the MACD indicator may not be real. There might be no reversal in the trend, and a trader may face loss due to it. The sign may be for a sideways movement or a pause in the trend. Thus, it does not forecast all the reversals for the market.

The MACD Trading indicator does not often give accurate indications of the change. As a result, the signals may fail to show correct change or provide an insignificant move of the trend, which could be wrong, and traders may face problems.

A trader can not access the indicators so quickly; they need to open an account with the online brokers. Brokers have all the required facilities and services needed to trade and enhance their trade.

ROInvesting is one of the best brokerage websites available online. Traders can go to the website of the broker, make an account and can trade easily using the various indicators.

So, a trader has so much access to smooth the trade of any instrument they want to trade. ROInvesting has a Moving Average Convergence Divergence indicator for traders use along with several other indicators. This simplifies the trade with easy predictions and analysis of the markets.

Moving Average Convergence Divergence ( MACD) is an essential trading tool that aids traders in analysing the market. Traders, through these indicators, know the market trends and momentum. Thus, predicting in advance the change to be prepared for the movements in price and the trend.

A trader can use the indicator to have price movements known and momentum analysed for getting the buy and sell signals. This would enhance the profits of the trade with better trade decisions. MACD trading dynamics are essential for traders who are serious about the trade. Traders can multiply their profits with the use of such feasible indicators. A useful and valuable trade indicator of the market.

This site is registered on wpml.org as a development site.