What is SafeMoon: A Complete Guide with Pros and Cons. 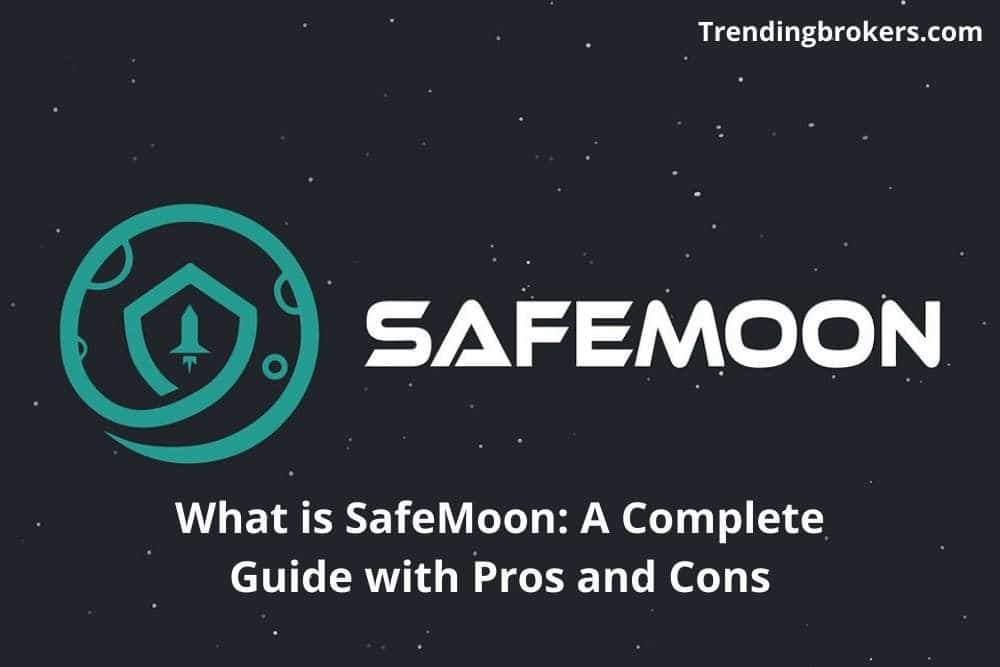 SafeMoon is a newbie to the cryptocurrency market, noted for its significant volatility, ten percent transaction fees, and social media buzz. It was launched on the Binance Smart Chain blockchain in March 2021 with distributed ledger technology like other well-known crypto coins such as Bitcoin and Ether on the Ethereum blockchain.

It was created with the goal of encouraging long-term investment, according to its developers. In contrast to Dogecoin, Shiba Inu Coin, and a number of other cryptocurrencies that appeared to be either a joke or bogus on the surface, half of the ten percent charged during transactions shared among long-term holders, and the other half goes to a liquidity pool that is intended to stabilize the price.

The main distinction between a SafeMoon token and other cryptocurrencies is that investors are urged to hold their tokens rather than sell them.

Rise of SafeMoon-Why is it so Famous?

SafeMoon protocol debuted in March 2021, following digital currencies such as bitcoin, Cardano, and dogecoin. More than two million people have already invested in the altcoin.

Due to an influx of investors in SafeMoon, the crypto exchange Binance had to suspend withdrawals on April 20 temporarily. As a result, the financial regulator has now placed Binance on a blacklist.

It was on more users’ watchlists than bitcoin in early May, according to market data firm CoinMarketCap (1.3 million vs. 1.2 million).

SafeMoon appears to be a high-risk, high-reward investment. If you are thinking about investing, here are three advantages and three disadvantages:

SafeMoon: Contribution to the Cryptocurrency World

There are various projects on the bitcoin market that offer large returns. In the crypto industry, it’s not uncommon to hear of platforms with APYs of 300 percent or even 500 percent.

However, volatility persists, and the majority of existing DeFi platforms are constrained by intrinsic issues, such as the famed rug pulls. Other issues include erroneous smart contracts that can be exploited.

SafeMoon provides a DeFi solution that makes the process easier. In addition, it gives the entire yield farming or liquidity mining operation an unprecedented level of security.

The SafeMoon project’s team consists of the following individuals:

SafeMoon: How does it Work?

The SafeMoon system is based on the platform’s BEP-20 token, which uses a combination of auto-liquidity generation and reflection tokenomics to operate. The deflationary mechanism of the cryptocurrency has already consumed 400 trillion tokens.

A ten percent fee is charged for each transaction, with five percent of the fee going to SafeMoon holders and the remaining five percent shared in half.

Half of the split % is sold into BNB (Binance Coin) via a smart contract, while the other half is instantly paired with BNB and placed to PancakeSwap’s liquidity pool.

Fans who stay on to the token are rewarded with fixed payouts, while those who sell their SafeMoon tokens are penalized for selling them repeatedly. Overall, the price of the token is stabilized, and the project’s liquidity is funded.

The value of a SafeMoon coin, like equities and shares or other currencies, could plummet. If investors sell on the back of a decline, they will not only lose money but will also face a 10% penalty.

Critics also claim that this incentive to stay invested resembles an old-fashioned pyramid or Ponzi scheme, in which existing investors rely on new entrants to raise their profits. Furthermore, cryptocurrency investments are not regulated in the United Kingdom.

The Financial Conduct Authority issued a warning to customers about the dangers of investing in crypto-assets that promise big returns in January this year. The warning came as the price of bitcoin reached new highs over the holidays, more than doubling in less than a month.

It’s also worth noting that converting SafeMoon or any other cryptocurrency back into cash can be difficult, and there’s no guarantee that the market will provide the liquidity that investors require.

SafeMoon: Should I put Money in it?

Despite efforts to establish stability by charging fees to investors who sell their tokens, there has been significant price volatility. This means that investors may have achieved amazing gains and devastating losses depending on their financial circumstances.

Investing in SafeMoon, like all digital currencies, is high-risk and should only be considered by people who:

How to Buy SafeMoon in the UK?

Potential investors must first create a crypto wallet on the Binance crypto exchange before purchasing Binance coins. Then, these can be traded in for coins.

Remember that it is part of the Binance smart chain ecosystem, and Binance is not permitted to conduct regulated business in the United Kingdom. Also, keep in mind that your money isn’t safeguarded if something goes wrong.

From where can you Buy it?

Analysts of digital currencies appear cautiously enthusiastic about the pricing. According to WalletInvestor, the value of a SafeMoon coin is expected to climb to $0.000051 in one year and $0.000237 in five years.

SafeMoon coins are a high-risk asset with no intrinsic value. Here are a few other dangers to consider while investing in it:

Liquidity may be difficult for traders who wish to get in or out of SafeMoon quickly due to the 10% tax that discourages selling. It is traded on Binance and PancakeSwap, two marketplaces that allow you to trade multiple digital tokens.

Its price has been extremely volatile since its inception, rising more than 20,000% before dropping more than 70%. Because cryptocurrency coins have no intrinsic value, your profit is determined by how much you paid for them and what you can get when you sell them.

Cryptocurrency coins are still relatively new, and governments are only now becoming aware of their potential impact. For example, China has outlawed cryptocurrency trading due to the financial risks and speculative trading it encourages. Therefore, increased tax rates on cryptocurrency profits could be viewed as regulation.

SafeMoon: What makes it Unique?

SafeMoon stands out from the crowd because of its uniqueness, which includes:

The 5% tokens granted to SafeMoon holders are known as static rewards. Because the 5% fee is part of the 10% fee imposed on every transaction, the amount distributed is dependant on the volume of tokens transferred.

It has a self-sustaining liquidity pool that collects tokens from transactions in the form of fees and deposits them in SafeMoon’s PancakeSwap liquidity pool.

This feature provides a token burn strategy for SafeMoon, in which the quantity of tokens is reduced to raise the price and demand of the tokens.

SafeEarn is a newly developed decentralized application on the Binance Smart Chain network that allows SafeMoon token holders to stake (or convert) their tokens and earn more automatically.

How is it different from Bitcoin?

It is a BEP-20 token that launched on the Binance Smart Chain. The founder of Binance, Changpeng Zhao, has confirmed that BSC is not decentralized. Zhao dubbed BSC “CeDeFi” in a since-deleted tweet, which is an oxymoron that stands for “centralized DeFi.”

The block creators are known as validators in proof of authority. Binance has pre-approved and selected these validators. They must authenticate their true identities, invest money to demonstrate long-term commitment, and be equal to all other candidates to be authorized. As a result, proof of authority is designed to be reputation-based.

Proof of work is a completely separate consensus process used by Bitcoin. Proof of work was the first consensus mechanism employed by blockchains, and it has proven to be highly effective at protecting a decentralized system from malicious actors.

SafeMoon is essentially at Binance’s discretion due to the centralized nature of proof of authority like all other tokens on BSC. However, all ships tend to rise with the tide. If Bitcoin continues to increase in this bull market, SafeMoon might follow suit, and other speculative investors could push it even higher.

Its value soared in April but has subsequently fallen as investors worry about the fee structure and a real-world application for the digital currency world.

Investors interested in gaining hands-on trading experience should consider opening an online brokerage account. ABInvesting is an active investing platform that allows you to choose stocks, ETFs, crypto, and more, as well as manage your account, all from the comfort of your smartphone.