Is the Cryptocurrency Market a Boon or Bane? 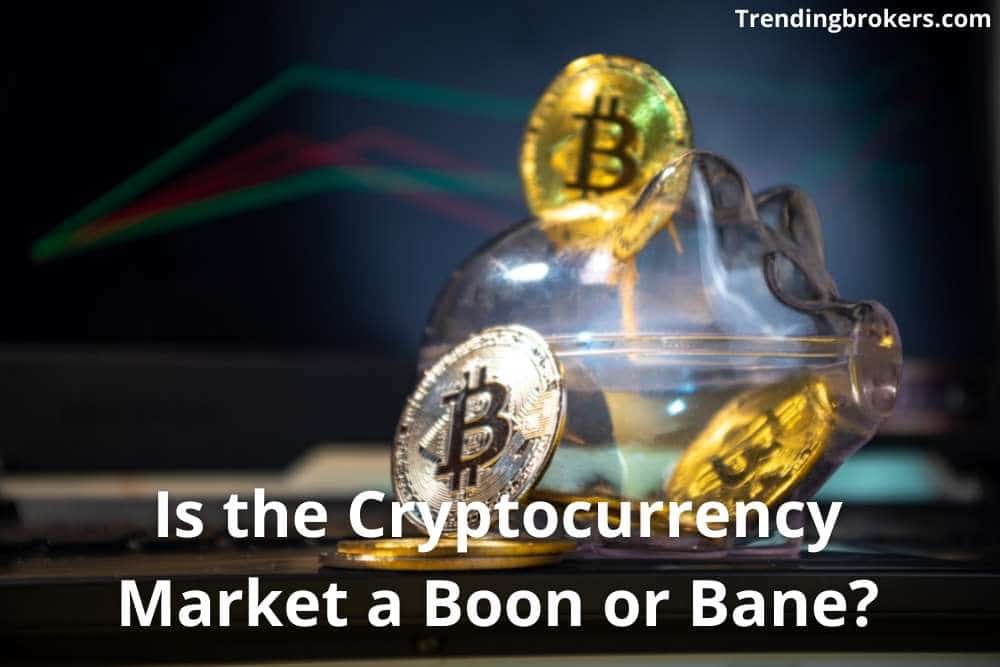 Cryptocurrency Market is a place of electronic money is exchanged via the internet. The cryptocurrency market is regulated, and they are safeguarded by complicated protocols and validated by encryption techniques used to generate currency units and verify payment transfers.

All digital transactions are recorded in a digital ledger, also known as the blockchain, which is a computerized database that uses powerful encryption to safeguard transaction record entries. As a result, they manage and verify the transfer of coin ownership.

Strong cryptography is a word used to describe cryptographic systems that are regarded to be very resistant to cryptanalysis or the study of hidden elements of information systems. Cryptocurrency Market is gaining traction due to the industrialization and use of technology. Bitcoin is one such currency. This well-known jargon is familiar to a large number of individuals.

The cryptocurrency market has dropped more than 65 percent from its all-time high in January 2018, wiping out more than US$500 billion from its entire cryptocurrency market capitalization in only six months. To put things in perspective, the total GDP of Malaysia and Singapore in 2017 was US$364 billion and US$324 billion, respectively. Because industry experts are divided on the future of cryptocurrencies, we’ll look at what’s causing the downturn and how to get it back on track.

A cryptocurrency is a sort of virtual currency that operates on the basis of digital data. In most cases, the files are created utilizing cryptographic procedures. Cryptocurrencies operate under ‘decentralized control,’ which means they are not controlled by the government or by a single individual.

Advantages of Cryptocurrency Market: Is it a Boon?

Investing in cryptocurrencies as a trader has many benefits other than earning profits, some of them given below:

It’s one of the most significant advantages of the cryptocurrency market, as inflation has caused the value of many currencies to depreciate over time. Almost every cryptocurrency is released with a fixed quantity at the moment of its inception. The number of every currency is determined by its source code.

Any currency’s governance and maintenance are drivers of its evolution. Miners collect cryptocurrency market transactions on their hardware and are rewarded with a Fee of transactions because the miners are reimbursed for their work. They maintain transaction records accurate and up to date.

Accessibility is immediate and 24 hours availability

You can spend or buy anything you want from any place, and you don’t even need a system to do so. Moreover, everything can be done from your smartphone, indicating that even persons with low technological knowledge related to the cryptocurrency market may invest and make decisions in real-time.

The US dollar, European euro, British pound, Indian rupee, and Japanese yen are all examples of currencies that may be used to purchase cryptocurrency. A currency may be changed into another by trading in the cryptocurrency market using several cryptocurrency wallets and exchanges, with minimum transaction costs.

Disadvantages of Cryptocurrency Market: Is it a Bane?

If anything has benefits, then it has drawbacks also with it. Some of the disadvantages of the cryptocurrency market are given below:

Because bitcoin transactions are reliable in terms of privacy and security, it is impossible for the government to trace down each user by their wallet address or maintain track of their data. Bitcoin has been used to exchange money for various unlawful transactions throughout history, including narcotics purchases on the dark web.

It is sought of a service that allows you to convert your cryptocurrency into another currency in the cryptocurrency market. Some cryptocurrencies can only be purchased using a single or limited number of fiat currencies. This restricts the user’s ability to transfer these currencies into one of the main currencies, such as Bitcoin or Ethereum, and subsequently to their desired currency via other exchanges.

Lack of Security in Loss Cases

As cryptocurrency market with growing technologies, some people take advantage of ineptitude to defraud, deceive, and steal your hard-earned money. Because this has been a concern with digital currencies, it is critical to be aware of the security threats. With a few basic security measures in place, the chances of creating irreversible loss are reduced.

Mining’s Negative Effects on the Environment

The cryptocurrency market may be used in various ways, but the majority of individuals who utilize it right now are doing so exclusively as an investment. In contrast, the enthusiastic users spend their virtual money on sporting event tickets, online gambling, or waiting for volatility to work in favor.

No Refunds and No Cancellation Policies

The sender cannot recover funds if there is a disagreement between the parties involved or if someone transfers funds to the wrong wallet address. Because there are no rebates, a transaction might be created for a product or service that was never obtained.

Since the release of the first IBM personal computer in 1975, and subsequently, in 1993 with the widespread use of the internet, technology has invaded homes and expanded over the globe as a new digital revolution that has placed complex and far-flung technologies into everyone’s grasp. The debut of the Cryptocurrency market in 2009 appears to have signaled the start of a new revolution in the way money is exchanged, and value is created.

In 2009, an anonymous Internet figure known as Satoshi Nakamoto created Bitcoin, a digital currency that functions on a decentralized network and allows users to interact with the cryptocurrency market directly without the involvement of a banking institution.

The technique to protect the decentralized transaction system is shown using a Peer-to-Peer Electronic Cash System. The mechanism is a distributed ledger that records transactions performed through a technology-based shared database or registry, most often known as the blockchain of the cryptocurrency market.

Cryptocurrency market submitted transactions are broadcast to miners at 10-minute intervals, and miners compete in computing the input necessary to produce the specified unique digital signature. The input, together with the transaction payee’s private key and the submitted transaction, is part of the prior blockchain’s cryptographic hashing.

The miner or group of miners to answer the mathematical input through network consensus will get cryptocurrency from the transaction and bitcoins mined from the system. The problem of duplicate spending is eliminated since the distributed ledger only records the first successful solution. The produced signature will be updated on the distributed ledger, providing indisputable confirmation of the transaction’s completion.

The transaction may be validated by comparing the unique signature to the payee’s public key. All transactions of the cryptocurrency market on the blockchain are irreversible, which adds to the network’s trustworthiness. As a result, blockchain provides a safe and transparent method for digitally monitoring asset ownership, minimizing costs by eliminating intermediaries or middlemen, and reducing fraud risk.

Cryptocurrencies have mostly grown into speculative assets, rather than relying on the immutability and resilience of blockchain to become a new cryptocurrency market payment channel. Traders who sell their fiat currency to buy cryptocurrencies often lack thorough knowledge of the idealism behind cryptocurrencies. The fear of losing out pushes them to buy them in the hopes of making rapid money.

The use of cryptocurrencies on the internet illegal black cryptocurrency market has tarnished the cryptocurrency’s reputation. For example, Silk Road, the now-defunct internet bazaar, was once a shelter for drug traffickers and other vices to complete transactions.

Bitcoin quickly became the portal’s primary form of transaction due to its anonymity. Silk Road persisted as a vice transaction center for another two years before being shut down by the Federal Bureau of Investigation.

Money laundering has also been carried out using cryptocurrency markets by criminals. This is because Cryptocurrency, rather than relying on the usual placement-layering-integration procedure, provides a rapid way for thieves to launder money and convert it to cash.

Is it the End?

Despite the bleak outlook for cryptocurrencies, it is vital to highlight that the core characteristics of cryptocurrency market blockchain have not changed. The principles of distributed ledgers, data immutability, and network consensus are still sought. Implementation of blockchain across many areas in the financial sector is progressively gaining pace.

By executing a letter of credit for Cargill for the shipping of soya beans, HSBC has completed the first trade finance transaction utilizing blockchain. This transaction took place on the Corda blockchain network, created by technology consortium R3, and has attracted several counterparties.

The Corda blockchain technology can validate trade papers more quickly, cutting trade cycle time by up to 40% and lowering costs by 30%. Private enterprises play a critical role in bringing blockchain to current businesses. Companies interested in participating in the ecosystem must act strategically to discover possible possibilities and stakeholders. Companies will need to demonstrate the advantages of the new business model and assuage concerns about the elimination of present manual procedures.

Replacing money with a national or international cryptocurrency necessitates a thorough examination of the social, political, and economic issues at play. While the entry of regulators may appear to go against the grain of disintermediation, it may be the first step toward restoring public trust and confidence.

Purchasing a cryptocurrency is essentially the same as investing in an unusual stock on the NASDAQ, but the cost to the environment is far greater. It contributes a significant amount to another cultural ill by failing to remedy one. Start cryptocurrency trading with a trustworthy broker like PrimeFin after gaining full knowledge of currency investment. Read booklets and have online classes given on brokers’ websites for gathering good knowledge and experience.

Q1. What are the drawbacks of cryptocurrency?

Cryptocurrency has several drawbacks, including the fact that it is used for money laundering, is extremely volatile, and poses significant security threats.

Q2. Is it a smart idea to invest money into cryptocurrency?

Investing in cryptocurrency may be lucrative, but it can also be hazardous, as it is a highly volatile currency subject to market changes.

Q3. Is the cryptocurrency in a bear market?

Many prominent cryptocurrencies have been suffocated by Bitcoin’s bear market, with the whole crypto market capitalization plummeting from $3 trillion to less than $2 trillion today. Altcoins with less liquidity, on the other hand, have witnessed a greater drop.

Q4. Is there a future for cryptocurrency?

However, as the cryptocurrency industry matures and more individuals enter the Cryptocurrency market, things are likely to alter. You can put it aside and spend it later if you have money. Experts believe that it will become a profitable investment choice when the Bitcoin industry matures.